×
Hobo Hotel uses its own and third-party cookies to provide a better service and also ensures that the advertisements better match your preferences. If you use our website you agree with our cookie policy. Read more

Thank you for playing Hobo!
Hobo was made with a lot of love ♥

Raizer - Rights due to respective owners. Website operates at a non-profit basis.

Lost your password?
FAQ
Find all the answers about your questions here!

Massacre on the Hobo Express 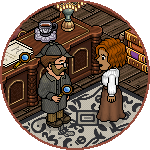 The Massacre on the Hobo Express is the first ever quest ever created on Hobo Hotel. The quest was created by user Puffin and was originally introduced on August 29th, 2021. The quest was re-worked and late released on Janurary 30th, 2021.

The quest rewards the person completing it 3,500 Credits, 5,000 Duckets and 25 Diamonds, as well as 50 Respect for achieveing honorary detective status within the community of Hobo.

You can begin the quest by going to the Public tab on the Navigator. It can be found under the category 'Quests'.

Didn't find the answer to your question? Do not hesitate to contact our customer service so that we can provide more information.